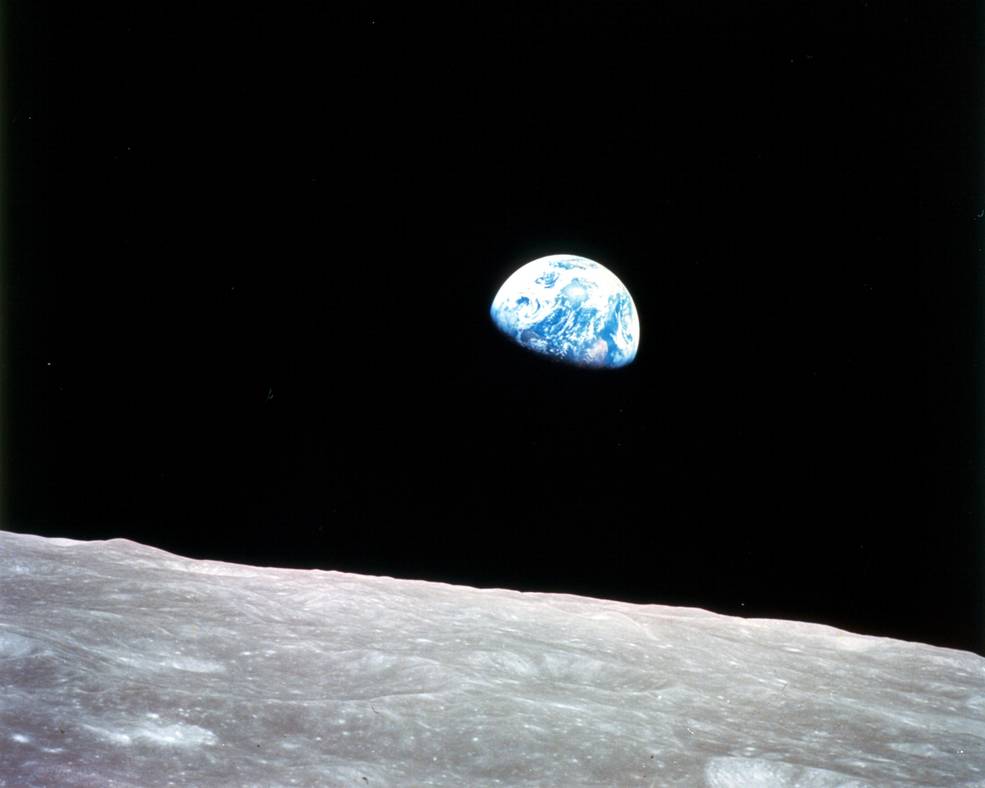 ¶ The iconic “Earthrise” photo (above) was the first photo of the earth taken from space, by crew of the Apollo 8, the first manned mission to the moon, which entered lunar orbit on Christmas Eve, Dec. 24, 1968. That evening, the astronauts—Commander Frank Borman, Command Module Pilot Jim Lovell, and Lunar Module Pilot William Anders—held a live broadcast in which they showed pictures of the Earth and moon as seen from their spacecraft. Said Lovell, "The vast loneliness is awe-inspiring and it makes you realize just what you have back there on Earth." They ended the broadcast with the crew taking turns reading from the story of creation in Genesis.

¶ Invocation. “In the face of suffering, one has no right to turn away, not to see. In the face of injustice, one may not look the other way. When someone suffers, and it is not you, they come first. Their suffering gives them 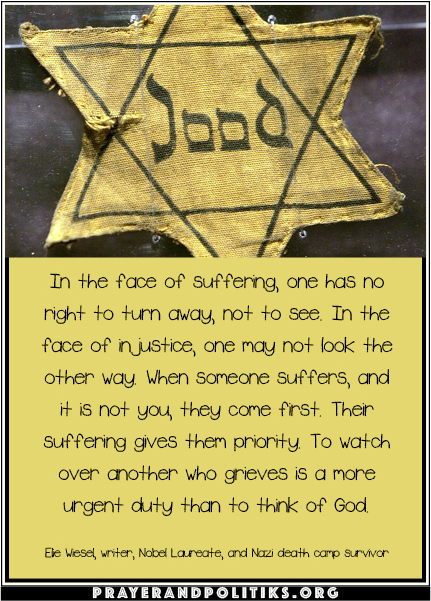 priority. . . . To watch over another who grieves is a more urgent duty than to think of God.” —Elie Wiesel, writer, Nobel Laureate, and Nazi death camp survivor

¶ Shoah. “The biblical word Shoah (which has been used to mean “destruction” since the Middle Ages) became the standard Hebrew term for the murder of European Jewry as early as the early 1940s. The word Holocaust, which came into use in the 1950s as the corresponding term, originally meant a sacrifice burnt entirely on the altar. The selection of these two words with religious origins reflects recognition of the unprecedented nature and magnitude of the events. Many understand Holocaust as a general term for the crimes and horrors perpetrated by the Nazis; others go even farther and use it to encompass other acts of mass murder as well. Consequently, we consider it important to use the Hebrew word Shoah with regard to the murder of and persecution of European Jewry in other languages as well.” —Yad Vashem: The World Holocaust Remembrance Center

¶ Watch this poignant drone video (2:29) of the remains of the Auschwitz-Birkenau concentration camp, filmed in 2015 on the 70th anniversary of the camp’s liberation. —BBC News

¶ Call to worship. “for thousands of years / people have gathered / under a grove of trees / or an expanse of sky / beside an altar of marble / or beneath a cloth of blessing / to bear witness to such / a beautifully simple act / of intention and promise” —continue reading Abigail Hastings’ “for thousands of years,” a call to worship at the 6 May 2006 wedding of Jessica Sehested and Richard Mark (to be repeated this weekend at the couple’s 10th wedding anniversary celebration)

¶ Yes, indeed! “I was pushing my empty cart through produce on a crowded Saturday afternoon when I heard this

over the speakers: ‘Susie, it's Mommy. I know you're lost and looking for me. I'm right here. Just sit down wherever you are and I will come find you.’” —Facebook post. One of the responders commented: “God is no different with us!” (Thanks Kenny.)

¶ Confession. “I am the image of God, spoiled.” —George Williamson, in his recently-published memoir, Born in Sin, Upended in Grace

¶ Words of assurance. “You’re in everything, and you are everything / To me and inside of me you do live (dwell) / And you’re never going to leave me / Shadow you always amaze me.” —English translation of final verse to “Negra Sombra” (“Black Shadow”), Luz Casal & Carol Nuñez

¶ Best one-liner of late from the internet. “Dear white people: No one is saying your life can’t be hard if you’re white but it’s not hard because you’re white.”

¶ Hymn of praise. “God of the poor man this is how the day began / Eight codefendants, i, daniel berrigan / Oh and only a layman's batch of napalm / We pulled the draft files out / We burned them in the parking lot / Better the files than the bodies of children. —Dar Williams, “I Had No Right”

¶ This is amazing. After sentencing a retired Special Forces sergeant to jail for violating probation , this NC judge spent the night in the cell with him—knowing the man suffered from post traumatic stress disorder after three tours of duty in Afghanistan. —Associated Press

¶ There are already many published remembrances of Daniel Berrigan and no doubt more to come. Here’s my favorite, from my friend and colleague Joyce Hollyday, “Mourning a Mentor & Friend.”

§ When they come for the innocent without crossing over your body, cursed be your religion and your life.

§ One cannot level one's moral lance at every evil in the universe. There are just too many of them. But you 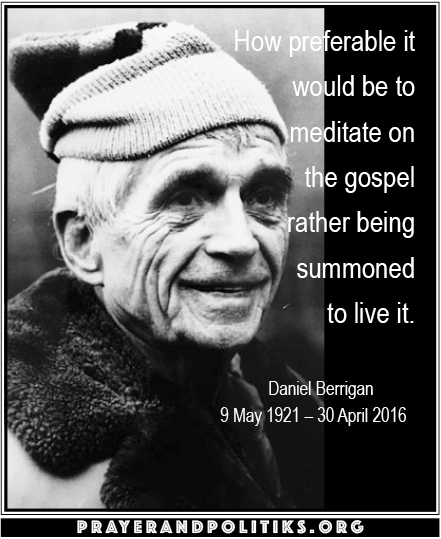 can do something, and the difference between doing something and doing nothing is everything.

§ Try to be marginal to the madness.

§ We have assumed the name of peacemakers, but we have been, by and large, unwilling to pay any significant price. . . . Of course, let us have the peace, we cry, but at the same time let us have normalcy, let us lose nothing, let our lives stand intact, let us know neither prison nor ill repute nor disruption of ties.

§ How preferable it would be to meditate on the gospel rather being summoned to live it.

§ What we plead for, what we are attempting to live, is the truth of hope, which asserts that men and women have been made new by Christ, that they can use freedom responsibly, that they can build a world uncursed by war, starvation, and exploitation. Such hope, once created, leads inevitably to nonviolent revolution.

§ If you want to follow Jesus, you better look good on wood."

§ Why do you stand? they were asked, and / Why do you walk? / Because the cause is / the heart’s beat, and / the children born, and / the risen bread.

§ Our apologies, good friends, for the fracture of good order, the burning of paper instead of children. How 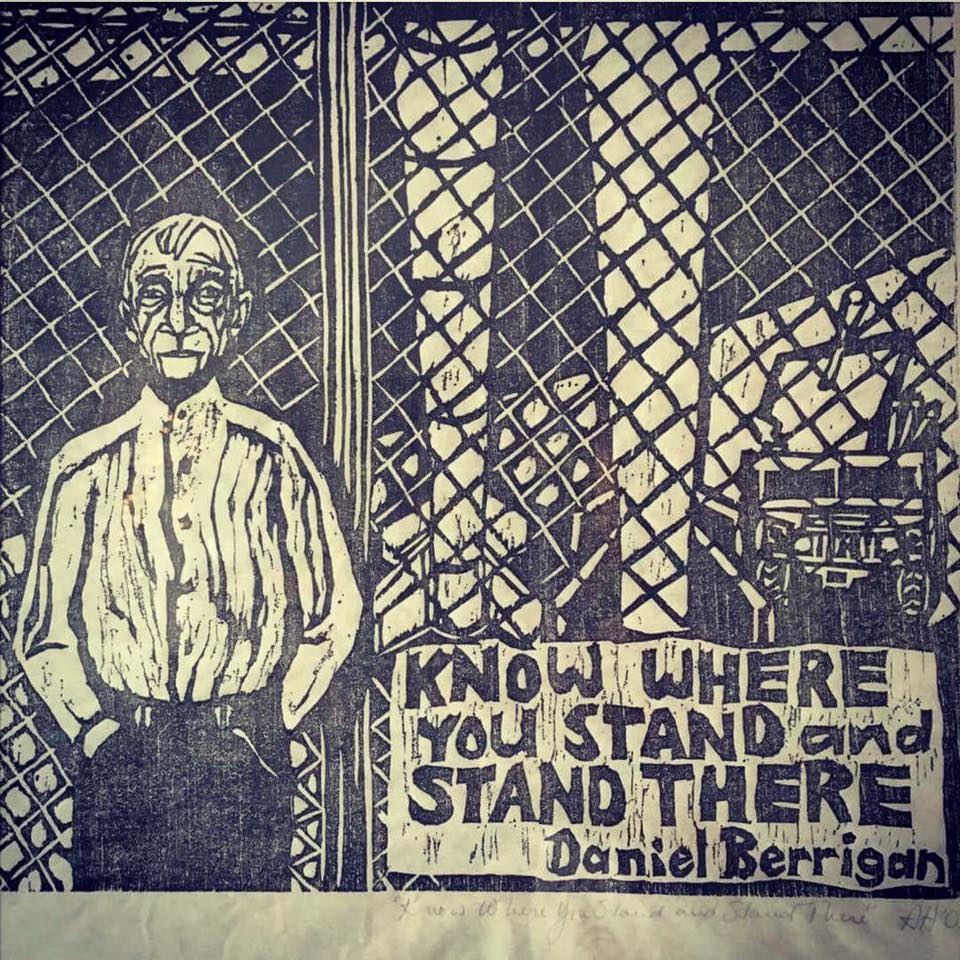 many must die before our voices are heard, how many must be tortured, dislocated, starved, maddened? When, at what point, will you say no to this war?

§ About practically everything in the world, there's nothing you can do. . . . However, about of few things you can do something. Do it, with a good heart. —see the other 9 on Berrigan’s “10 Commandments”

¶ Berrigan had a cameo role in the 1986 film “The Mission,” a powerful story about 18th century Jesuit missionary work in Latin America starring Robert De Niro. It has the most amazing dramatization of repentance and forgiveness I’ve ever seen, not to mention the probing depiction of the choice between violent and nonviolent response to injustice. In April 2007 “The Mission” was elected #1 on the Church Times’ “Top 50 Religious Films” list.

¶ For the beauty of the earth. Watch this mesmerizing video (1:36) of sheep herding in New Zealand. (Scroll down to the second photo to see the film.)

¶ Preach it. “War becomes perpetual when it is used as a rationale for peace.” —Norman Solomon

¶ The state of our disunion. Noam Chomsky explains, in one sentence, how the interests of private capital

undermine the public good, fostering survival-of-the-fittest ethics: “That’s the standard technique of privatization: defund, make sure things don’t work, people get angry, you hand it over to private capital.”

¶ Call to the table. On this, my 65th birthday, I’ve made a new vow. From here on, whenever some public figure says “we need more boots on the ground” in any of our nation’s 134 theaters of conflict, I shall write them to say,
“Sir/Madame (bloodlust increasingly an equal-opportunity villany), please come out from behind the dishonesty of your words: When you advocate for more ‘boots on the ground’ have the courage to say ‘we need more of your sons and daughters.’
If by “war” you mean “conflicts where the US is launching extensive military incursions, including drone attacks, but that are not officially ‘declared,’” there are but five: Iraq, Afghanistan, Pakistan, Somalia and Yemen.
But if by “war” you mean countries where US Special Operations Forces are involved in combat, special missions, or advising and training foreign fighters, there are 134 of those. —continue reading Ken Sehested’s “Boots on the ground and other obfuscations”

¶ Benediction. “Let all religious people beware. Their earnest longing for God is predicated on the reservation on

their part that it is necessary for them to do something to find God. The Word of God in the Bible, however, is that God does not await human initiative of any sort but seeks and finds us where we are, wherever it be.” —William Stringfellow

¶ Recessional. “When the rain is pouring down / And my heart is hurting / You will always be around / This I know for certain / You and me together / Through the days and nights.” —video of Justin Lawrence Hoyt's dock-side dance (4:46) to Alicia Keys “No One.”

¶ Lectionary for Sunday next. “Worthy, worthy the One who conceived the earth and gave birth to bears and basil and beatitudes alike. The earth is satisfied with the fruit of your work! At the sound of your Name the trees rejoice, for you are clothed with honor and clad in beauty.” —continue reading Ken Sehested’s “The earth is satisfied,” a litany for worship inspired by Psalm 104

Featured this week on prayer&politiks:

• “Boots on the ground and other obfuscations,” commentary on dishonest language

• “The earth is satisfied,” a litany for worship inspired by Psalm 104

• “The Promise of Pentecost,” a litany for worship

• “All Together,” a litany for Pentecost

• “The Promise of Pentecost,” a sermon for Pentecost

• “for thousands of years,” a wedding call to worship by Abigail Hastings

©Ken Sehested @ prayerandpolitiks.org. Language not otherwise indicated above is that of the editor. Don’t let the “copyright” notice keep you from circulating material you find here (and elsewhere in this site). Reprint permission is hereby granted in advance for noncommercial purposes.

Your comments are always welcomed. If you have news, views, notes or quotes to add to the list above, please do. If you like what you read, pass this along to your friends. You can reach me directly at klsehested@gmail.com.