Above: Fiery topaz hummingbirds are found in Brazil, Colombia, Ecuador, Peru, and Venezuela. Their natural habitat is subtropical or tropical moist lowland forest.

¶ Invocation. “O God of justice, ignite the hearts of our legislators with your commitment to truth and your demand for justice. Give them wisdom to match their passion, intelligence to match their zeal. May their eyes be sharp enough to behold Your vision of righteousness. May their ears catch the cries of all who are despoiled and devoured. May their hands be large enough to reach across the rancor in our land.” —“Give wisdom to legislators,” a litany for worship inspired by Psalm 72 and the seating of the 116th US Congress

¶ Call to worship. “Epiphany represents Heaven’s response to Christmastide’s conflicting claims of dominion. Who is to be named Prince of Peace? For it was said of Augustus, Rome’s imperial Caesar (from a 9 BCE inscription on a statue of Augustus): 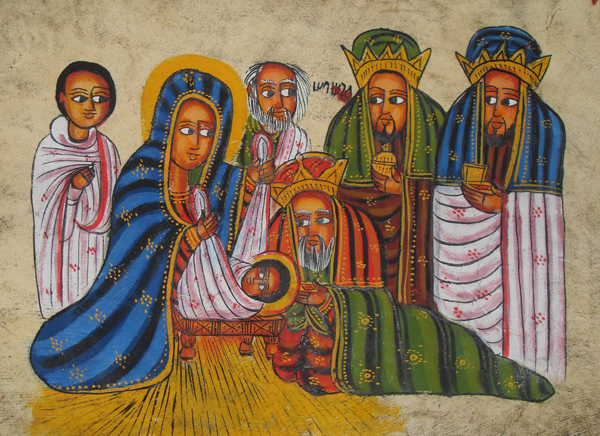 “‘Providence has ordained the most perfect consummation for human life by giving it to Augustus, by filling him with virtue for doing the work of a benefactor among men, and by sending in him a savior for us all, to make war to cease, to create order everywhere. The birthday of the god [Augustus] was the beginning for the world of the glad tidings that have come through him.’” —kls

¶ Hymn of praise. “We Three Kings of Orient Are,” Robert Shaw Chorale

¶ Professing our faith. “There are three versions of what Epiphany (“Manifestation”) is meant to commemorate in the church’s calendar. One of those traditions is to celebrate Jesus’ baptism on January 6. Another tradition (the Orthodox) links Epiphany Sunday with the birth of Jesus. Yet another tradition celebrates Epiphany as marking the arrival of the magi—of “We Three Kings” fame, the figures played in every Christmas play by children dressed in bathrobes. Yet the common element in each is the inauguration of a confrontation between God’s Only Begotten and those in seats of power.” —continue reading “Epiphany: Manifesting the Bias of Heaven”

¶ Good news. A record 102 women were sworn into the US House of Representatives this week. They include the first female Muslims, the first female Native Americans, the youngest woman to serve. The House changed its rules so that Ilhan Omar (D-MN) can wear her hijab.) For 35 of these women, this is their first elective office.

Keep in mind, though, that this record number is still less than 24% of the total of House members. In the Senate, the number of men increased. In the 116th Congress, the House is 60% white men while the Senate is 71%

white men—both historic lows. And about 100 countries around the world have higher percentages of females in their national legislatures.

¶ Hymn of resolution. “The time has come / We’ve got to turn this world around / Call the mothers / Call the daughters / We need the sisters of mercy now.” —Keb’ Mo’, “Put a Woman in Charge,” feat. Rosanne Cash

¶ More good news. “Three months after two of the largest supermarket chains banned plastic grocery bags, an estimated 1.5 billion bags have been prevented from use, the Australian Associated Press reported, citing the National Retail Association. Overall, the bans introduced by Coles and Woolworths last summer resulted in an 80% reduction in the country's overall use of the single-use item, the retail group revealed.” —Lorraine Chow, EcoWatch (Thanks Wendy.)

¶ Confession. Moral void in the highest office: “You don’t choose a president based on how good they are.” —Rev. Jerry Falwell, Jr., key spokesperson for white evangelical Christians in the US

¶ Some historical background: “1919: The Year of the Crack-Up.” “In his overquoted poem from 1919, Yeats wrote ‘things fall apart, the center cannot hold.’ Those words often ring true today, in another divided moment. But one of the comforts of history is seeing how wrong the earlier prognosticators of doom could be. By studying the ways

in which we failed to fall apart, perhaps we can glean a small harvest of hope for the year ahead.” —Ted Widmer, New York Times

¶ Words of assurance. “Arise, shine; for your Light has come, for heaven’s Glory rises to greet you! . . . Open your eyes, oh People of Promise! Throw off fear’s blinding cover and see the Radiance that lights the Way Home.” —continue reading “Every portal of sight”

¶ Hymn of lament. “No food on my table / And no shoes to go on my feet / My children cry for mercy / They got no place to call your own / Hard times, hard times.” —John Lee Hooker, “No Shoes”

¶ Word. How the Revised Common Lectionary (RCL) minimizes Jesus’ command to love enemies. “[Eric] Lemonholm’s most striking example [of missing and disconnected texts in the RCL] is “love your enemies.” The RCL actually assigns both Matthew’s version of that text and Luke’s. But in both cases it’s slated for the seventh Sunday after Epiphany, one of the Ordinary cycle’s odd benchwarming weeks—used only when the liturgical calendar’s stars align.  Week seven didn’t make it into the Year A or C calendar between 2001 and 2011. “A ten-year absence of Jesus’ command to love our enemies occurred,” says Lemonholm, “during the first ten years of the war on terror.” —Steve Thorngate, “What the text: Alternatives to the revised common lectionary,” Christian Century

¶ Offertory. “We Three Kings Of Orient Are,” A Hero for the World.

¶ Short take. “For most Christians in the Western tradition, Epiphany is about “we three kings.” You know, the wiseguys, from the east, probably Persia—modern day Iran. They weren’t kings at all, but probably a combination of priest and scientist and royal advisor. The text from Matthew doesn’t say they rode camels. The text doesn’t even say there were three of them. That’s part of background we’ve colored in to appropriate and domesticate the story for our own cultural purposes. Appropriating and domesticating biblical stories has long been practiced by imperial powers. . . .

“The pretense of piety is standard practice for political strategy. Every political actor bent on ruling knows that

epiphanies must be appropriated and domesticated for partisan use if order and stability is to be maintained.” —continue reading “Wiseguys and One Scared King”

¶ “Despite widespread angst about growing illegal immigration, the number of unauthorized immigrants in the United States actually has decreased over the past decade. In 2007, there were 12.2 million immigrants here without legal status. By 2016, that had fallen to 10.7 million, a decline of about 14% . Of those 10.7 million, two-thirds of the adults have lived here more than 10 years, meaning they aren’t new arrivals but long-term residents. As is often the case, public fears and political propaganda don’t square with the facts. Undocumented immigrants make up about 3% of the U.S. population.” —Paul Prather, kentucky.com

¶ When only the blues will do. “We Three Kings of Orient Are,” Ella Fitgerald.

¶ Preach it. “The birth of Christ in our souls is for a purpose beyond ourselves: it is because his manifestation in the world must be through us. Every Christian is, as it were, part of the dust-laden air which shall radiate the glowing epiphany of God, catch and reflect his golden light.” —Evelyn Underhill

¶ Can’t makes this sh*t up. “In a since-deleted, U.S. Strategic Command, which controls the nation's strategic missile systems and coordinates offensive nuclear capabilities worldwide, joked that while people in New York City enjoyed the dropping of ‘the big ball’ during the countdown to midnight, ‘we are ready to drop something much, much bigger.’

Beneath the message was a video, as the New York Times describes it, of ‘a B-2 stealth bomber soaring across the sky before releasing two GPS-guided bombs ’ that exploded into a giant ball of fire after hitting the ground below.’”

“Among the reactions of outrage on social media, Walter Schaub, former head of the Office of Government Ethics, simply asked: ‘What kind of maniacs are running this country?’” —Jon Queally, CommonDreams

¶ Call to the table. “There are events in our personal lives and our collective history that seem categorically irredeemable, moments in which the grounds for gratefulness and hope have sunk so far below the sea level of

sorrow that we have ceased to believe they exist. But we have within us the consecrating capacity to rise above those moments and behold the bigger picture in all of its complexity, complementarity, and temporal sweep, and to find in what we see not illusory consolation but the truest comfort there is: that of perspective.” —Maria Popova, “John Steinbeck on Good and Evil, the Necessary Contradictions of the Human Nature, and Our Grounds for Lucid Hope,” brainpickings (Thanks Wendy.)

Right: The Three Kings by James He Qi

¶ Best one-liner. “Human kindness has never weakened the stamina or softened the fiber of a free people. A nation does not have to be cruel to be tough.” —Franklin D. Roosevelt

¶ For the beauty of the earth. A time lapse video of the Milky Way galaxy rotating over an ancient baobab tree. This sequence was shot over a period of almost 8 hours at "The Island of Lost Baobabs" in Botswana's Makgadikgadi Pans. —Burrard-Lucas Photography. (Thanks Michael.)

¶ Lectionary for this Sunday. “Epiphany of the Lord,” commentary on Ephesians 3:1-12

¶ Lectionary for Sunday next. “When you pass through the waters, I will be with you; and through the rivers, they shall not overwhelm you; when you walk through fire you shall not be burned, and the flame shall not consume you.” —Isaiah 43:2-3

Featured this week on prayer&politiks

• “Give wisdom to legislators,” a litany for worship inspired by Psalm 72 and the seating of the 116th US Congress

• “Epiphany: The queerness of God,” a sermon for Epiphany Sunday

• “Epiphany: Manifesting the Bias of Heaven," a meditation on the season

©Ken Sehested @ prayerandpolitiks.org. Language not otherwise indicated above is that of the editor, as are those portions cited as “kls.” Don’t let the “copyright” notice keep you from circulating material you find here (and elsewhere in this site). Reprint permission is hereby granted in advance for noncommercial purposes.

Feel free to copy and post any original art on this site. (The ones with “prayerandpolitiks.org” at the bottom.) As well as other information you find helpful.

Your comments are always welcomed. If you have news, views, notes or quotes to add to the list above, please do. If you like what you read, pass this along to your friends. You can reach me directly at kensehested@prayerandpolitiks.org.